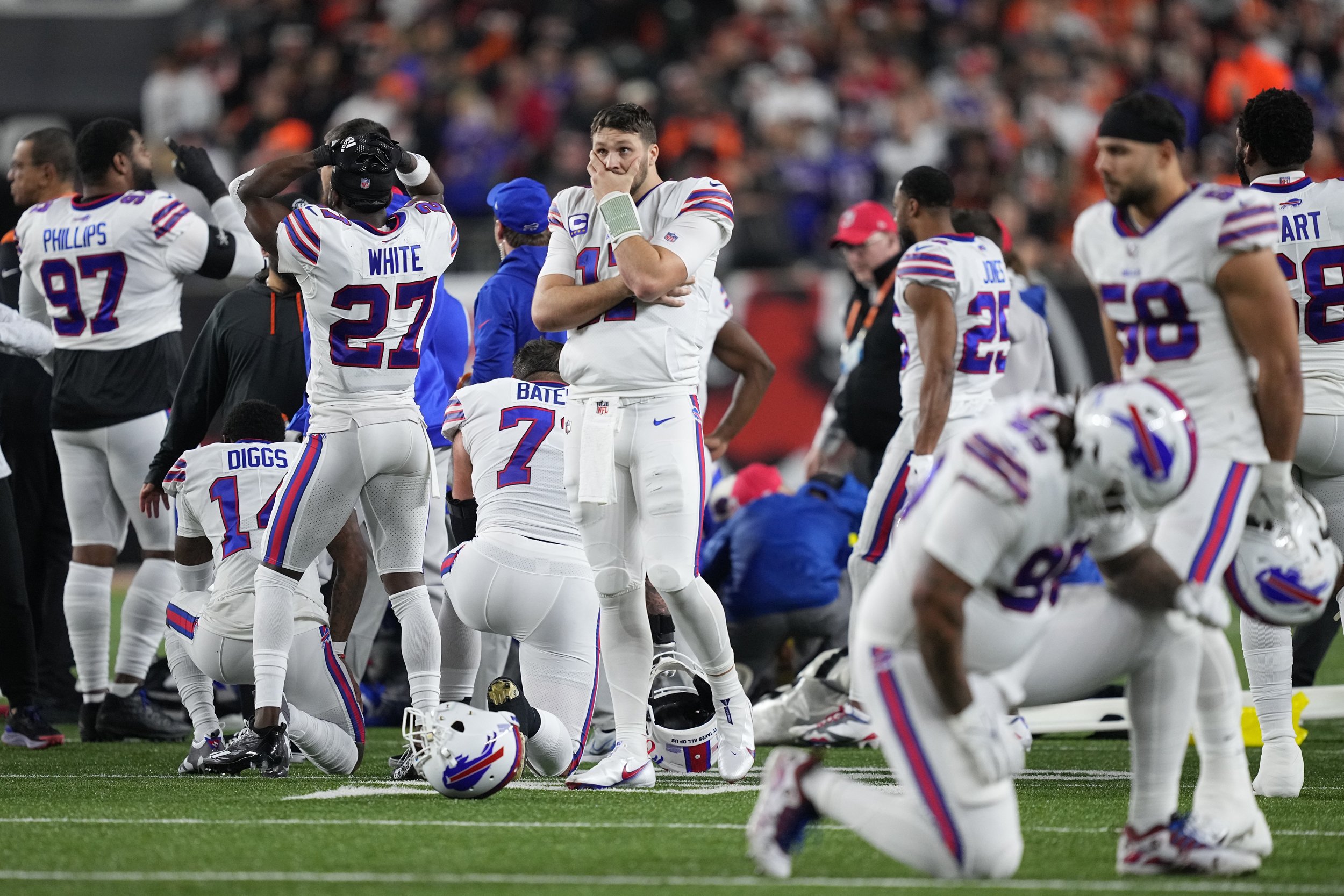 The Buffalo Bills no longer control their own destiny. There are more than a half dozen playoff scenarios now in play, including neutral site options for several potential playoff games. But the next order of business is finishing the regular season against Bill Belichick’s New England Patriots.

And if the Bills are inspired rather than dispirited because of the events surrounding Damar Hamlin’s near-death experience, they should be counted on to win one for their teammate, who is making a remarkable recovery.

Damar Hamlin is now speaking with his doctors and his family and his teammates, and anybody who watched Monday Night Football should be astonished that he and the Bills are in their current situation. Because — let’s all be honest with each other — it appeared that Hamlin was not going to make it to Tuesday after he collapsed against Cincinnati earlier this week.

The fact that he is alive is a testament to the Bengals and Bills having doctors on the sidelines who knew exactly what to do when they saw that Hamlin had no pulse, and then did it. Immediately. Eight minutes of CPR and the quick insertion of a breathing tube saved that young man’s life. Had that not happened, we might have been looking at a football-free January.

Even before January 2, @HamlinIsland was so much more than a football player. He’s a fighter; devoted family member and friend; servant leader who has impacted hundreds of kids in his hometown of Pittsburgh; and now, the Week 18 #CommunityMVP.

Where Do The Bills Stand in Seeding?

The short answer to that question comes via an acronym: TBD (To Be Determined).

Much will depend on what transpires this weekend, and the need for a neutral site game could actually become moot. NFL owners voted Friday on a number of contingencies, including:

If there is a neutral site #NFL playoff game, what is the best place to play it? (Need a large stadium)

The Chiefs play today against the Las Vegas Raiders, so the Bills will have more clarity by the time their 1 p.m. home game against New England kicks off Sunday. The Bills, who are favored by 7 1/2, defeated New England 24-10 on the road Dec. 1 in a game that was never very competitive.

Including the playoffs last season, the Bills have won their last three meetings with New England. The Patriots can clinch a playoff spot with a win. If they lose, they hold the tiebreaker over Miami and Pittsburgh. But that would become moot if the Steelers defeat the Browns or the Dolphins defeat the Jets.

Some measure of clarity in the AFC will arrive by dinnertime Sunday, while the NFC will be in limbo until the Green Bay Packers’ win-to-get-in game against Detroit concludes late Sunday night.

How about this week?

Will Hamlin Situation Impact the Bills?

The fact that Hamlin has been facetiming with his teammates is an enormous boost to the Bills’ collective psyche. Every single NFL player knows there are risks in their chosen profession. But not many considered the life-and-death risk until Monday night. It was an unprecedented event, maybe even worse than the Darryl Stingley tragedy in 1978 when he was left paralyzed after a hit by Raiders defensive back Jack Tatum. Stingley eventually died from from heart disease and pneumonia complicated by quadriplegia.

Hamlin’s recovery scenarios remain unknown, and every football fan out there can agree that it would be inspirational to everyone if he can get released from the hospital in time to join his teammates on the sidelines for the Bills’ first playoff game. Again, that is a TBD.

It stands to reason that the Bills may come out a little bit flat Sunday. But football players are resilient. By the time the second half arrives, the Buffalo players should be able to focus on the task at hand. They are the +380 second choice behind the +350 Chiefs to emerge as Super Bowl champions, while Belichick’s team is +15000 to win it all. Doubt that guy at your own peril. He has been to that game nine times.

What Are The Wagering Trends?

On moneyline bets, DraftKings Sportsbook is seeing 60% of handle on Buffalo. On moneyline bets, that percentage rises to 79. Some 67% of over/under wagers are coming in on over, 43 1/2. The Bills are 7-7-1 against the spread; the Patriots are 7-8-1. Buffalo has gone over in only five of 15 games, while New England has gone over seven times and under nine times. The Bills have gone over in two straight games. New England has gone under in six of nine.

In terms of player props, what stands out for New England is that safety Kyle Dugger is the only player in the NFL with two pick-6s (interceptions returned for touchdowns). But he is not on the board at any of New York’s nine licensed sportsbooks to be an anytime TD scorer. Pats running back Rhamondre Stevenson leads the team with 6 TDs, but is only +120 to be an anytime TD scorer.

Despite the lack of creativity from the folks setting lines at these books, we are undeterred.

Stefon Diggs has not had a TD reception since Dec. 1 and is overdue. Because he had a three-touchdown game in Week 2 against Tennessee, we know he is capable. Parlaying Diggs to score at least two TDs, along with the bets where very high percentages are going: Bengals ML, Steelers-Browns under, Vikings -6, Bucs +4, Cowboys-Commanders over, and Rams-Seahawks over, creates a +15397 line at BetMGM. So a $10 wager would pay $1,550. Just an idea, and Diggs scoring two TDs may be a reach. But it is not  the worst $10 flyer in the history of $10 flyers.

The post Buffalo Bills Must Try to Win For Damar Hamlin And AFC Playoffs Positioning appeared first on Casino.org.