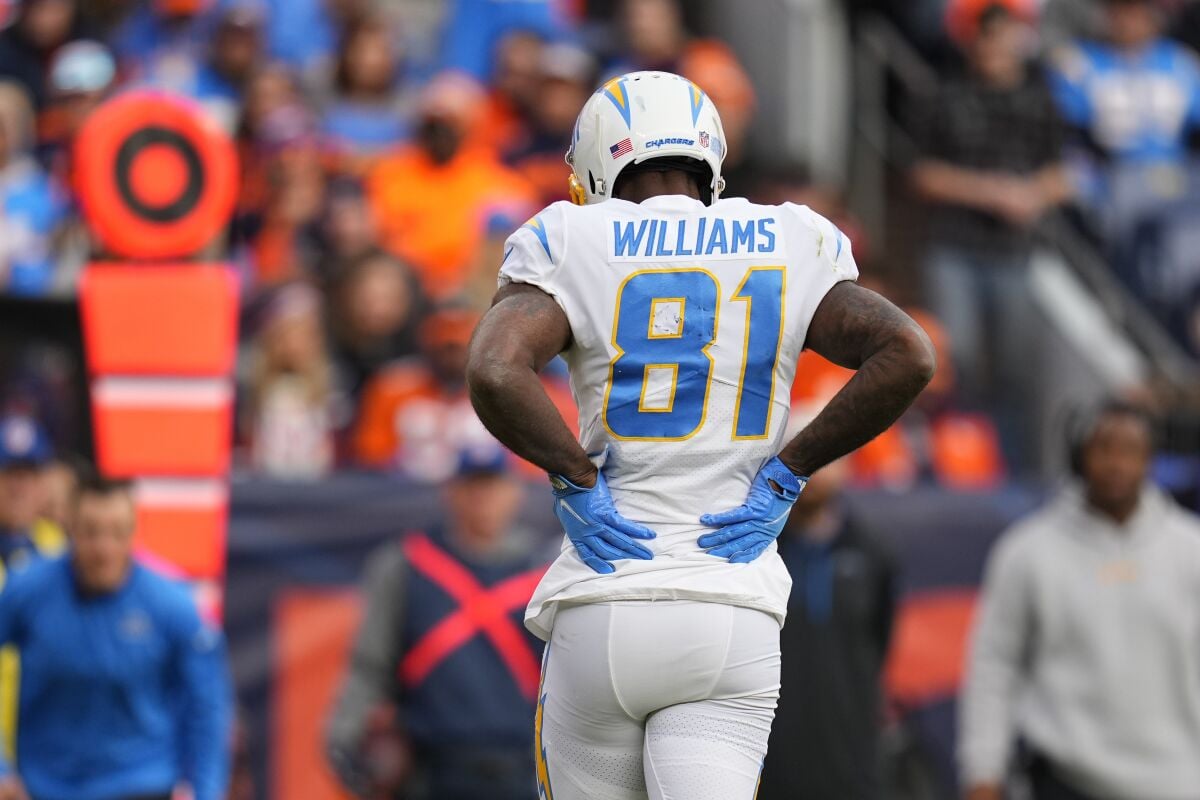 The Los Angeles Chargers announced that wide receiver Mike Williams has a fractured back. The injury will prevent him from playing in the AFC Wild Card round against the Jacksonville Jaguars.

Williams sustained a microfracture last Sunday in the final game of the season. He will miss at least two weeks, and possibly three weeks. If the Chargers continue to advance in the AFC Playoffs, Williams could be sidelined until the Super Bowl if the Chargers make a miraculous run without one of their top offensive weapons.

The #4 Jacksonville Jaguars (9-8) host the #5 Chargers (10-7) in the first round of the AFC Playoffs on Saturday evening. The Jaguars and Chargers are the second game of a six-game slate during Wild Card Weekend.

If the Chargers defeat the Jaguars in the Wild Card, they’ll advance to the AFC Divisional Round to play the #1 Kansas City Chiefs. With the best record in the AFC at 14-3, the Chiefs earned a bye in the opening round.

In the final game of the regular season, Williams suffered a back injury against the Denver Broncos. It knocked him out of the game in the second quarter, and he did not return.

Head coach Brandon Staley was heavily criticized for playing most of his starters in a meaningless game that had no influence on the team’s playoff seeding. Williams was one of three players who were dinged up against the Broncos. Staley vehemently defended his controversial decision to play his starters, including quarterback Justin Herbert.

I stand behind what we did in that football game,” Staley told the L.A. Times. “All my players are really important to me. There were a lot of players that were playing in that game that were in harm’s way. That’s just the nature of football.”

Earlier in the week, we reported that Williams did not sustain a fractured back because initial X-rays and an MRI were negative. Initial reports indicated that Williams avoided a serious back injury and was diagnosed with a back contusion.

However, Williams experienced pain and discomfort this week and underwent an additional testing and imaging. The latest round of tests revealed a hairline fracture. The Chargers suggested it could take two to three weeks to recover, but back injuries are tricky.

Williams led the Chargers with 985 receiving yards in just 13 games. He caught the second-most touchdown receptions on the Chargers this season with four scores. He also led the team with 14.2 yards per catch.

Herbert spreads the ball around on offense, but he relies heavily on dual-threat running back Austin Ekeler as an important part of the passing game. Ekeler leads the Chargers with 107 catches and five touchdown receptions. Tight end Gerald Everett is also one of Herbert’s favorite targets in the red zone with four touchdown receptions.

Williams missed almost a month in the middle of the season with a high ankle sprain. Backup wide out Joshua Palmer did an excellent job filling in for Williams. In 16 games this season, Palmer caught 72 passes for 769 yards and three touchdowns.

Keenan Allen missed seven games with multiple injuries, but he still contributed 66 receptions and scored four touchdowns. Allen, a former All-Pro wide receiver, could play a pivotal role against the Jaguars as one of the few members on the team that has playoff experience.

Oddsmakers initially opened the Jaguars/Chargers game as a pick’em. Early money poured in on the Chargers even after oddsmakers moved the line to -1, and eventually -2. Bettors ignored the Jaguars as a home dog, and continued to back the Chargers, even with a banged-up Williams.

On Friday afternoon, the line had moved to the Chargers as a-2.5 favorite. Even after the Chargers provided the public with an injury update on Williams, the news did not alter the betting line. Even without Williams, bettors are confident the Chargers can defeat the Jaguars and cover the point spread by a field goal.

With a points total of 47.5, the Chargers vs. Jaguars have the second-highest over/under total during Wild Card Weekend. The marquee matchup on Saturday evening should be a high-scoring and exciting game featuring two of the top young quarterbacks in the league with Herbert versus Trevor Lawrence.