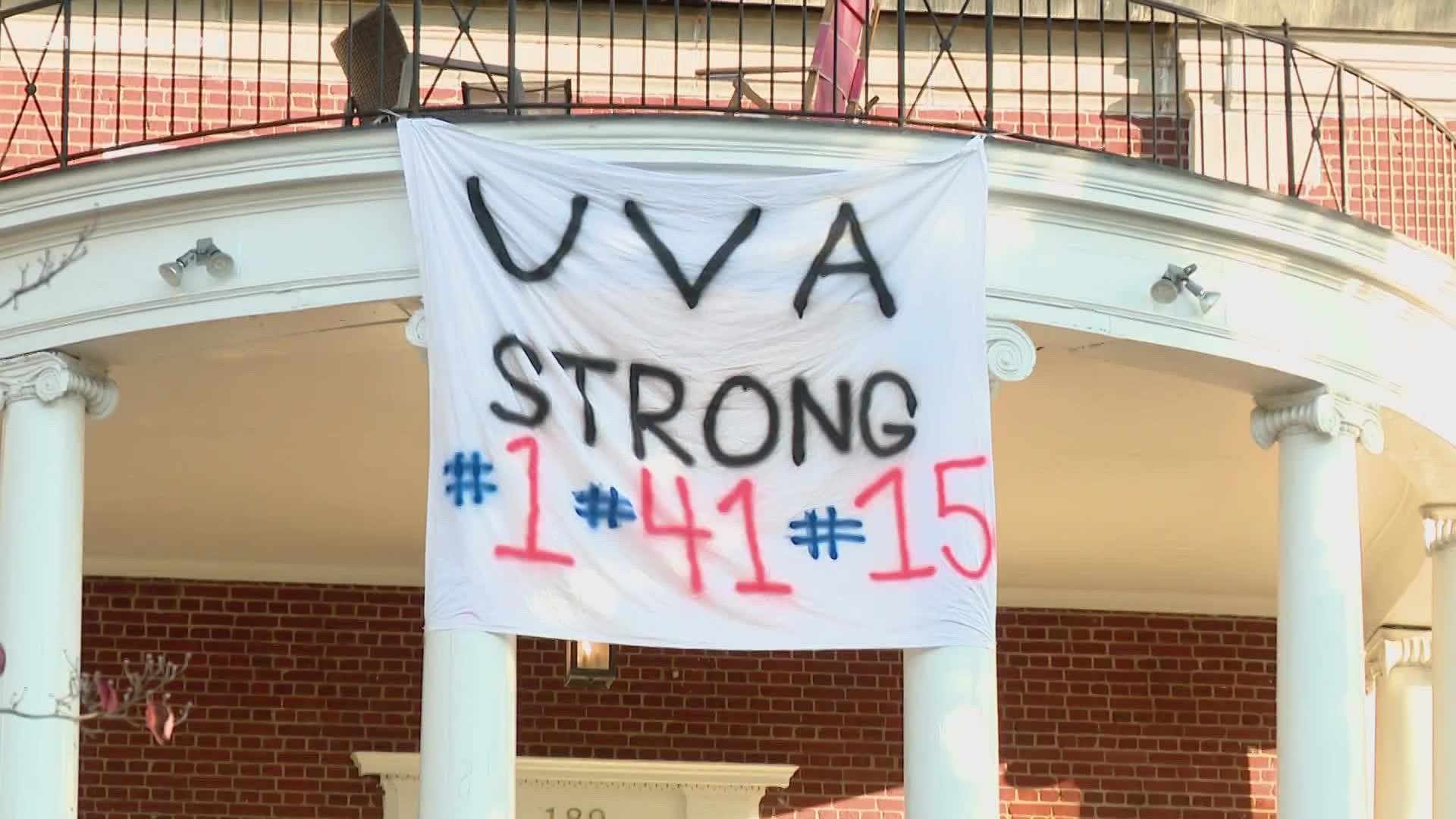 Plans for the rest of the University of Virginia (UVA) football season are in limbo as the campus continues to mourn the loss of three football players. They were shot dead on Sunday by a former player. Two other students, at least one of whom was also on the team, remain hospitalized with injuries.

Students at the Charlottesville campus remain stunned Tuesday from the tragedy. Thousands of students attended a candlelight vigil for the slain students on Monday night.

Also, throughout the historic campus, the names and numbers of players Devin Chandler, Lavel Davis Jr. and D’Sean Perry are found on banners as a way to pay tribute to them.

Classes on the campus were canceled Monday and Tuesday. UVA also canceled a Monday night basketball game against Northern Iowa. But the university has yet to announce what it plans to do with future games.

When reached for comment, Richard M. Southall, director of the College Sport Research Institute at the University of South Carolina, told Casino.org that UVA has several options, none of which are optimal.

Virginia is still scheduled to play Coastal Carolina this Saturday in Charlottesville. That is the final home game of the season. A Nov. 26 game is scheduled at Virginia Tech. The status of these game remains unknown.

As far as the future, Southall does not expect the shootings would impact the recruiting of future players.

Devin, Lavel and D’Sean were our classmates, teammates, friends and family. They were study partners and role models. They made us laugh and inspired us. They had dreams. They succeeded both on and off the field. They are forever Cavaliers. https://t.co/EbUDvUrxUW #UVAStrong pic.twitter.com/JXJFuK2abV

The accused shooter, Christopher Darnell Jones Jr., 22, was apprehended by police on Monday morning, some 80 miles east of Charlottesville.

The five victims had been on a field trip to see a play in Washington, DC. When the chartered bus returned to campus, they were wounded in a shooting spree.

Another student on the bus, Ryan Lynch, told Philadelphia television station KYW, “Chris got up and pushed and pushed Lavel. After he pushed him, he was like, ‘You guys are always messing with me.’”

We thought he was going to shoot everyone in the bus at that point,” Lynch added. “I thought we all were going to die.”

The suspect’s father said his son had been acting paranoid about a month ago when he reported to his dad he was being bullied.

He had some problems the last time I talked to him,” Chris Jones Sr., told WWBT, a Richmond, Virginia, TV station. “He said some people were picking on him or whatever, he didn’t know how to handle it.”

“I just told him, ‘Go to school, don’t pay them no mind,’” Jones Sr. said. “He was really paranoid when I talked to him about something, but he wouldn’t tell me everything. He was a very sensitive young man.”

The father also apologized to the victims and their families on behalf of his son. When the younger Jones was a student at Petersburg High School in Richmond, he had a 4.2 GPA and was named MVP on the football team.

Jones was only on the UVA football team in 2018. A prior injury kept him from playing, CNN reported.

But more recently, it was revealed that as UVA officials investigated a hazing issue, an unnamed student was told by Jones that he possessed a gun, CNN reported. Jones previously was convicted of a concealed weapons violation in 2021, university officials told the news network. He was given a 12-month suspended sentence and ordered to pay a fine.

UVA forwarded the incident for review by the university’s Threat Assessment Team and judicial council for possible disciplinary action.

UVA, like other universities, likely has predetermined plans in place for crises involving violence on campus.

I would assume that UVA has some policies in place for such a situation,” Southall said. “I would hope the athletic department will abide by their developed policies.”

In 2007, a mass shooting took place at Virginia Tech. A student killed 32 people and wounded 17 other victims. Six other victims were injured when jumping out of windows to avoid getting wounded.