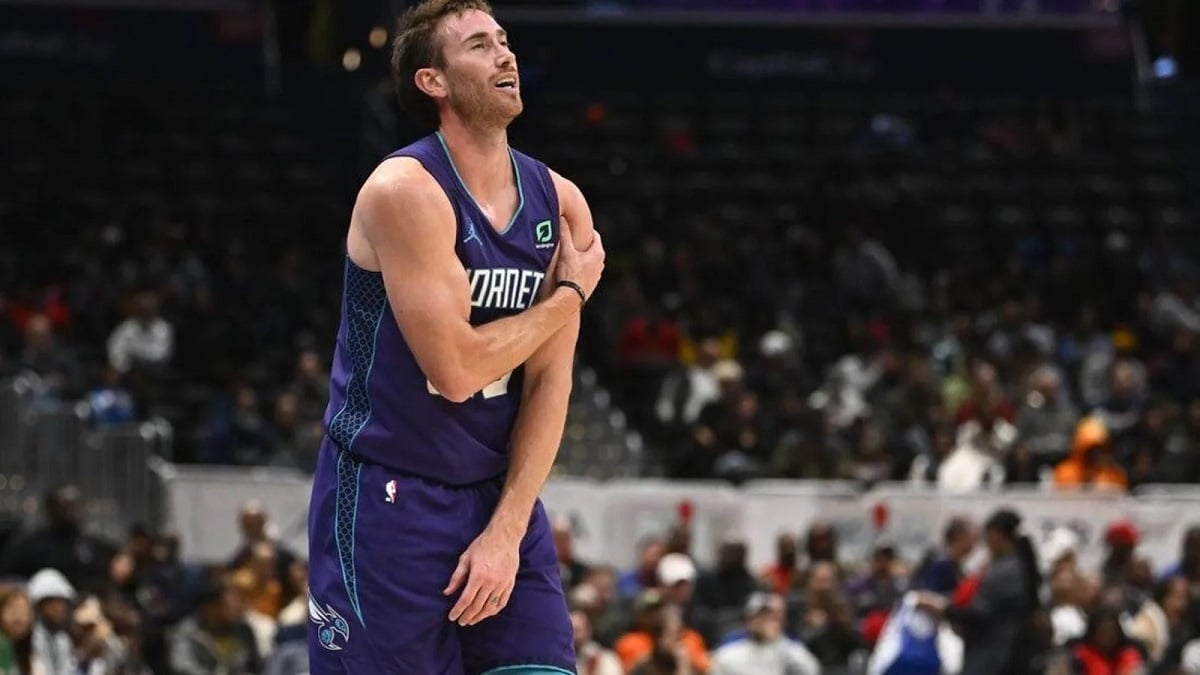 The Charlotte Hornets have been plagued by the injury bug this season, including forward Gordon Hayward, who will be out indefinitely with a fractured left shoulder blade.

Shams Charania from The Athletic typically breaks a lot of big NBA stories. But in this instance, an NBA wife scooped the beat writer.

Robyn Hayward, the wife of Gordon Hayward, vented her frustrations about the Charlotte Hornets organization in a series of Instagram stories on Friday under the account of @robynmhayward.

He actually has a fractured scapula… that they had him play with last game… that’s why he couldn’t move his arm up in the last game,” Robyn Hayward posted on Instagram.

Robyn Hayward responded to a social media post from the Hornets that said her husband would not play in Friday evening’s game because of a shoulder contusion. Hayward had missed eight-straight games earlier in November with the injury, but he appeared in three consecutive games before he was sidelined on Friday.

“I’m over them not protecting players,” added Robyn Hayward. “Just was talking with a young player’s mom, and she was saying the same thing.”

Was just about to tweet that Gordon Hayward’s wife posted this on her IG story about his injury https://t.co/ulbztlovFL pic.twitter.com/iihIIHlxtt

Hayward averages 16.3 points, 4.4 assists, and 4.3 rebounds per game in 11 games with the Hornets. He missed time earlier in the season from a knee injury, which the Hornets designated as a “knee contusion” on the injury report. He also missed eight games this month with the controversial “shoulder contusion.”

Hayward apparently suffered the shoulder injury against the Chicago Bulls in the first week of November. He scored seven points in just 12 minutes before he exited the first half and never returned. The Hornets claimed that Hayward missed the second half of the Bulls game because of left shoulder soreness. Hayward sat out the next eight games, and the Hornets were 1-7 in his absence.

The Hornets were 1-2 in the last three games in which he played. Hayward averaged 13.3 ppg in that span, including 13 points, seven assists, and six rebounds in 42 minutes of action, a double-overtime loss against the Cleveland Cavs last Friday. He scored 20 points and knocked down 3-for-6 from 3-point range in a four-point loss against the Washington Wizards last Sunday.

Hayward Asked for a Trade

During the off-season, Hayward did not like the direction of the Hornets and asked the team to trade him. He hinted that he’d like to return to the Utah Jazz, but the Jazz were in the middle of imploding their team and trading away veterans. Hayward made too much money, which is why the Jazz were not interested in bringing him back to Salt Lake City.

The Hornets fired head coach James Borrego, and rehired former head coach Steve Clifford in an effort to revamp their defense. Hayward stuck around this season to play for Clifford. But then again, he was not fielding many calls from teams interested in a trade.

Hayward is in the third year of a four-year contract worth $120 million. The Hornets took a lot of guff for offering a hefty contract to a player who is prone to injuries. The haters had a point. Hayward missed 28 games with the Hornets in 2020-21, and missed 23 games last season. In 20 games this season, Hayward missed nine games and counting.

Hayward earned a spot on the 2017 NBA All-Star team in his seventh and final season with the Utah Jazz before he signed a free agent contract with the Boston Celtics. He fractured his leg in the season opener in 2017, and played in just one game with the Celtics that season. After three bumpy years in Boston, Hayward headed to the Hornets.

With a bum shoulder and a big contract, the Hornets and Hayward look like they’re stuck with each other unless there’s a team seeking a salary dump trade at the trade deadline in February.

The Hornets are 6-14 this season as the third-worst team in the Eastern Conference. Only the Orlando Magic (5-14), Detroit Pistons (5-16), and Houston Rockets (4-14) have fewer wins than the Hornets this season.

Hayward is one of several starters in Charlotte who missed time with injuries. Point guard LaMelo Ball suffered a sprained ankle in the preseason and did not make his season debut until mid-November. Ball appeared in just three games before he reaggravated the same ankle when he accidentally stepped on a courtside fan while chasing down a loose ball.

With the Hornets struggling to win games with so many starters injured, fans would like to see the Hornets tank the rest of the season for a shot at winning the 2023 NBA Draft Lottery. The Hornets are in dire need of a center, and they’re among a half-dozen teams coveting 7-foot-3 French prospect Victor Wembanyama.

The Hornets are super long shots at +100000 odds to win the 2022-23 NBA championship, and are lumped together with the worst teams in the league at the bottom of DraftKings’ NBA futures board.