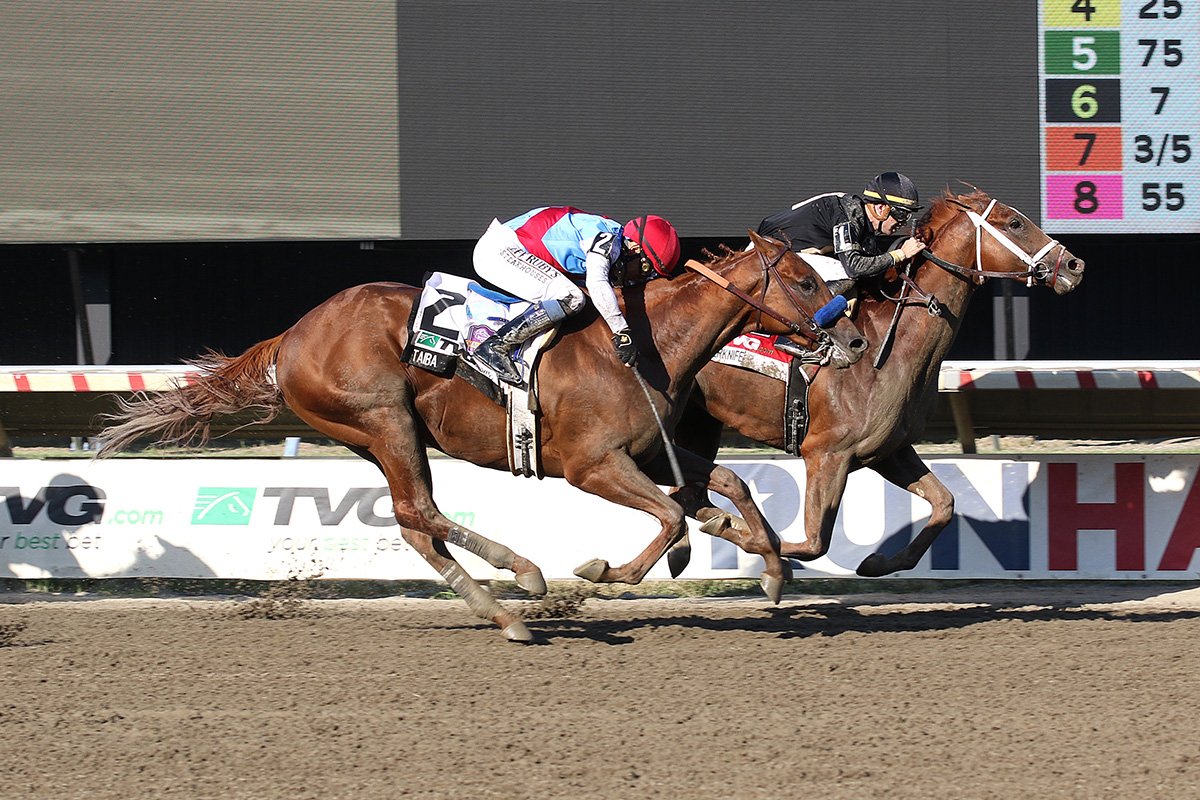 A field of 11 three-year-olds is set to race in Saturday’s Pennsylvania Derby at Parx Racing, and the $1 million race features a deep field with several contenders.

The morning-line favorite is Taiba at 5-2. That’s the Bob Baffert-trained colt who won the Santa Anita Derby nearly six months ago. If Taiba and jockey Mike Smith earn their second Grade 1 stakes win Saturday, then it will give Baffert a record fourth win in the race.

Taiba, though, is lightly raced. He’s only raced twice since the Santa Anita win. He finished a disappointing 12th in the Grade 1 Kentucky Derby, and two months ago, he squared off with Cyberknife in a fierce stretch duel at the Grade 1 Haskell Stakes, with the Brad Cox-trained colt winning the thriller by a neck.

Those two will meet up again in Bensalem on Saturday. Post time for the Pennsylvania Derby is 6:10 pm ET, and FanDuel TV will broadcast the race.

“He likes to be in the clear, so that is good,” Baffert said. “He doesn’t like being on the inside. I would rather be the five of the six, but this will be ok. Cyberknife is a tough horse. They are all good horses in here. Million-dollar races are not easy. They are not supposed to be easy. As always, you have to break.”

Cyberknife, the 3-1 second choice on the morning line, is the most accomplished horse in the field. Taiba’s half-brother, as both were sired by Gun Runner, has four wins in his last six races. That includes the Haskell, where he finished the mile and an eighth in a Monmouth Park record 1:46.24 and beat Taiba by a head.

His only blemishes in that stretch were finishing 18th in the Kentucky Derby, where he was a victim of an extremely fast start, and then faltered as he went very wide coming out of the final turn, and a second-place finish in last month’s Grade 1 Travers Stakes. The Brad Cox-trained colt led for most of the race before Epicenter just took over coming out of the final turn to win by more than five lengths.

Cox thought of holding Cyberknife out until the Breeders’ Cup in November, but decided otherwise after a recent workout.

He had a really good breeze last weekend,” Cox said. “Time wise, it wasn’t anything crazy fast, but it’s how he’s doing, how he looks, how he’s acting. This is one last swing at a Grade 1 (stakes) around two turns for straight 3-year-olds.”

Given how he’s performed over the summer, Cyberknife is my pick here. It won’t be an easy race, as Taiba gave him fits in the Haskell, and the field has other accomplished runners. However, outside of the Kentucky Derby, he’s performed well against tough horses.

He will break from the fifth gate and has Florent Geroux aboard.

Other top horses in the field include Zandon, Tawny Port, and White Abarrio. Beyond them, Skippylongstocking, We the People, and Simplification also have graded stakes wins on their resumes.

Zandon, hasn’t won since April’s Grade 1 Blue Grass Stakes at Keeneland. But the Chad Brown-trained colt has finished in the money in every start since. That includes third-place showings in the Kentucky Derby and Travers, with a second-place finish behind Epicenter in the July 30 Jim Dandy Stakes at Saratoga.

Tawny Port, another colt from Cox’s barn, finished third in the Jim Dandy and won the June 25 Grade 3 Ohio Derby before that. At 6-1 on the morning line, he is seeking his third graded stakes win, and he’ll break seventh. Irad Ortiz, Jr. will ride him.

On the outside will be White Abarrio, who starts at 8-1 on the morning line. After a pair of wins early in the year at Gulfstream Park, in the Grade 3 Holy Bull Stakes and the Grade 1 Florida Derby, the Saffie Joseph, Jr.-trained colt has hit the board just once – second place in the Ohio Derby – in his last three starts. Luis Saez gets the mount on Saturday.

Here’s the draw for the Pennsylvania Derby: