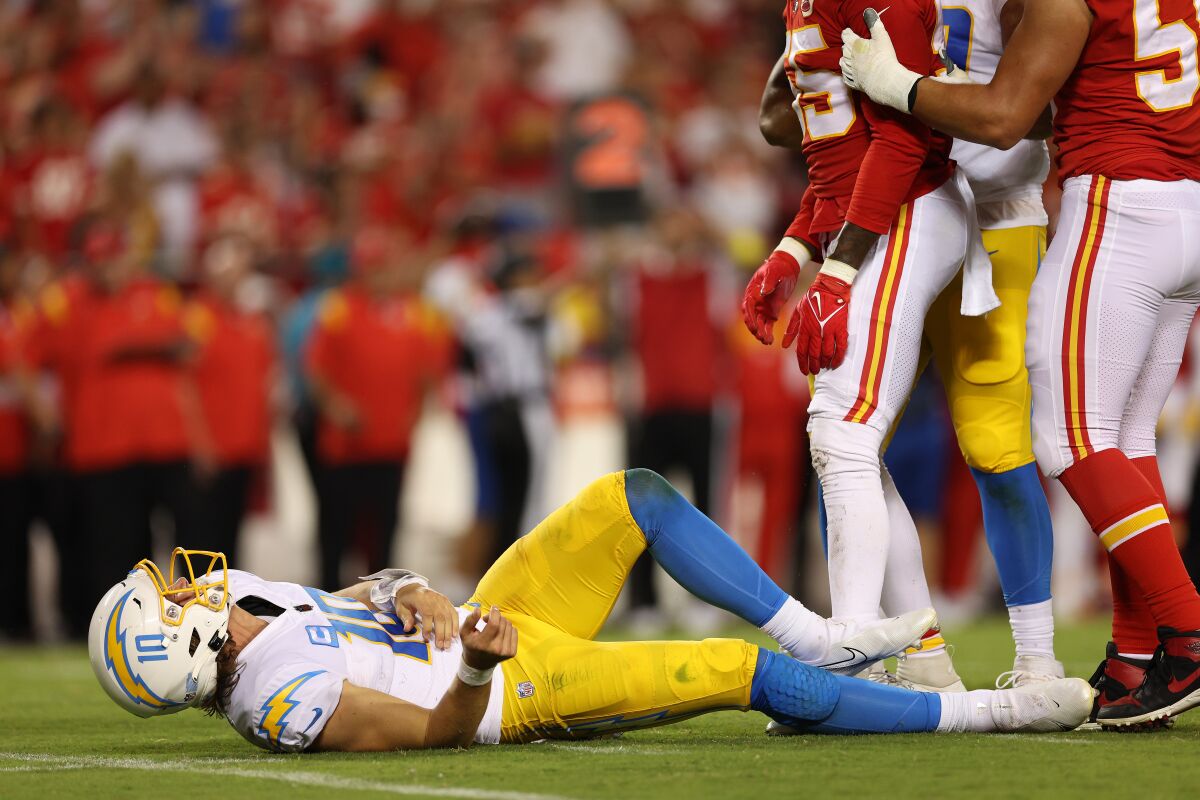 It’s bad enough that the Los Angeles Chargers were beaten by the Kansas City Chiefs on Thursday Night Football. But their starting quarterback took a huge hit that could impact the rest of their season. Justin Herbert suffered a rib injury in an AFC West divisional joust against the Chiefs.

Herbert’s injury occurred with a little more than five minutes remaining in the fourth quarter and the Chargers trailing, 27-17. Kansas City defensive end Mike Danna collided with Herbert on a clean hit during a pass attempt. Herbert stayed down for several minutes and could be seen clutching his chest or left ribs when he got up.

Backup quarterback Chase Daniel took one snap while Herbert sat out one play. Herbert finished the game even though he was in obvious pain. He tossed a missile of a pass to help set the Chargers up for a late touchdown. Yet, the Chargers couldn’t pull off a comeback victory against the Chiefs and lost, 27-24.

Herbert completed three touchdowns and tossed for 334 yards in the loss. He also threw a costly interception that turned into a 99-yard pick-six for the Chiefs.

After the game, Herbert underwent X-rays. On Friday, Herbert will undergo testing in Los Angeles to gauge the severity of the injury.

The Chargers played on Thursday in Week 2, so they’ll have a couple of extra days of rest before their next contest in Week 3.

Dr. David J. Chao spent several seasons as the team physician with the San Diego Chargers before the team relocated to Los Angeles. He watched the game in real-time and offered his quick diagnosis based on the instant replays.

“Herbert can tough it out without a rib block injection,” Chao said.

Dr. Chao suggested that even if Herbert avoided a fracture, he could have a rib cartilage injury that could fester for the rest of the season.

A rib cartilage injury can be more painful and linger longer,” added Chao. “May need rib intercostal block injection to play next week.”

“It was just a tough NFL game, and he took some big hits,” said Staley.

“Those ribs will hurt for a while,” said former NFL quarterback Rich Gannon on Twitter. “Total pain. Will make practice difficult next week. Extra days off will really help. May need an injection pregame next week.”

On Deck for Chargers: Jaguars in Week 3

In Week 3, the Chargers (1-1) host the Jacksonville Jaguars (0-1) at SoFi Field in Inglewood. The game was initially billed as the battle of two young quarterbacks, with former #1 pick Trevor Lawrence squaring off against Herbert.

The Westgate Superbook in Las Vegas opened the Week 3 game with the Chargers as a -9 favorite. Expect the look-ahead line to change if there’s an update on Herbert’s injury.

The Chargers also lost two starting members of their offensive line last night. Center Corey Linsley missed the entire second half because of a knee injury. Right tackle Trey Pipkins sprained his ankle in the second half. The Chargers finished the game with two backups protecting Herbert. Pipkins and Linsley will also undergo more testing on Friday. Their status for Week 3 is unknown.

The Chargers could hobble into Week 3’s matchup against the Jaguars with a banged-up quarterback, a short-handed O-line, and missing a key offensive star.

Wide receiver Keenan Allen injured his hamstring in Week 1. Allen missed the Thursday Night Football matchup against the Chiefs. His status is unknown, but the Chargers hope a week off could be enough of a respite so he can suit up against the Jaguars.