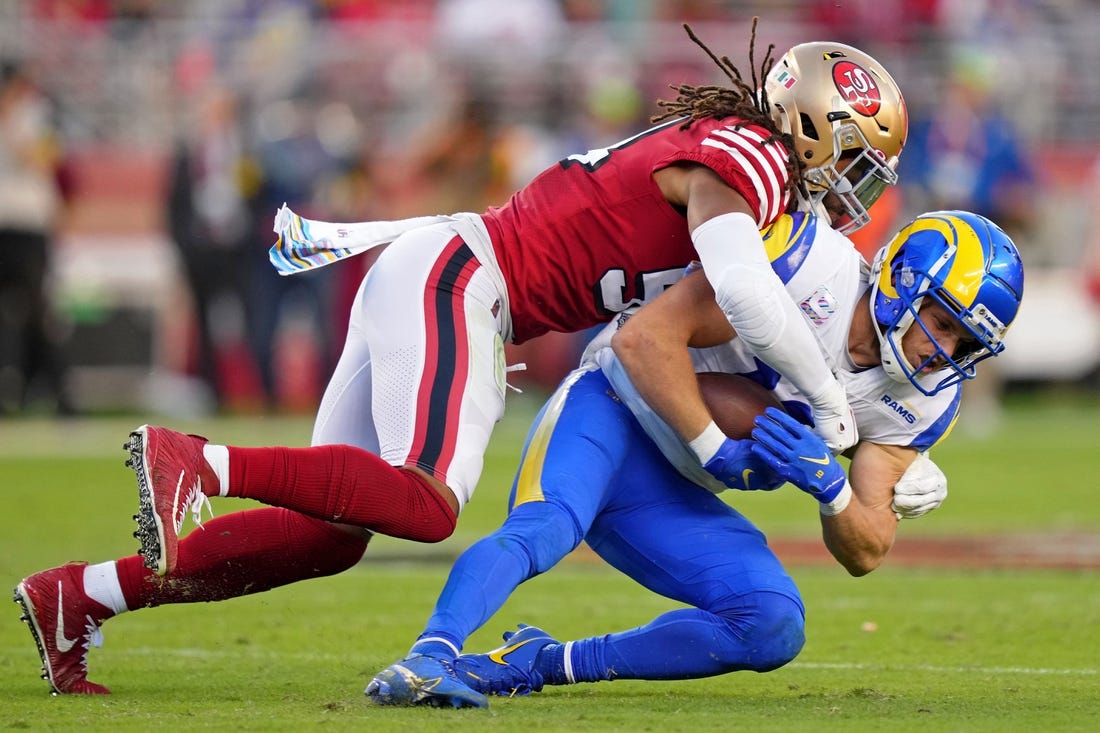 The San Francisco 49ers and L.A. Rams met on Monday Night Football in what would turn out to be a lopsided game. But the best play for the Rams, and possibly hardest tackle, wasn’t even against the Niners.

The last game of Week 4 was a repeat of the California rivalry that defined the NFC championship last season. On that occasion, the Rams beat the 49ers on their way to becoming the Super Bowl champions.

On Monday, the 49ers were able to enjoy a little revenge on their own field. They took out the Rams with a powerful performance from their defense, coupled with several explosive offensive plays, winning the game 24-9.

Rams QB Matthew Stafford suffered four sacks in the first half and would receive another three in the second. Stafford couldn’t keep the Rams together as they struggled in the red zone, failing to score a touchdown throughout the game.

Stafford, despite his troubles, didn’t have a horrible day. He went 32 for 48 passing to gain 254 yards. He had an interception and also lost the ball a second time on a questionable call by the refs in the last two minutes of the game. That was an exclamation mark on an already rough day.

Receiver Cooper Kupp was the standout for the Rams, and had 122 yards with 14 receptions. It was a single-game best performance, but not enough to carry a team whose defense stayed home in L.A.

Quarterback Jimmy Garoppolo put up a robust performance for the 49ers, completing 16 of 27 for 239 yards with no interceptions and one touchdown pass. Receiver Deebo Samuel also had a great night, chalking up 115 yards and an impressive touchdown after a breakaway dash through the line.

The Rams struck first with a field goal that delivered the first points conceded by the 49ers in the opening quarter so far this season. Garoppolo started the 49ers with the passing game, but it was running back Jeff Wilson Jr. who opened the scoring for the home side. He scored a 33-yard rushing touchdown after splitting the Rams’ defense right down the middle.

San Francisco continued to run over L.A. As the first half was drawing to a close, Samuel grabbed a pass from Garoppolo and then proceeded to dodge or knock down all of the Rams who got in his way. He finished his performance with a 52-yard TD run that made it clear that the Rams’ defense was failing.

Halftime adjustments did nothing to improve the Rams’ offensive performance. They got on the board once again through a field goal, but that would be the end of any significant offensive success.

Meanwhile, the 49ers seemed to have the game under control. They started the fourth quarter with a field goal to extend their lead. A Pick-6 by safety Talanoa Hufanga late in the game sealed the win for San Francisco.

The sportsbooks had the Niners winning, although the moneyline wasn’t overwhelmingly in their favor. That will likely change going forward. The over/under was 42.5 and, like Stafford, came up way short.

The night’s best hit by the Rams didn’t target the 49ers. A fan invaded the field at Levi’s Stadium with less than a minute to play in the first half, carrying a pink smoke bomb in his hand.

The unidentified man ran around for a few seconds inside the field of play as he tried to avoid a couple of security guards. When he approached the Rams bench, he found out what an NFL tackle feels like. Rams linebacker Bobby Wagner took him out with a solid hit that was intensified as the man slammed into the turf.