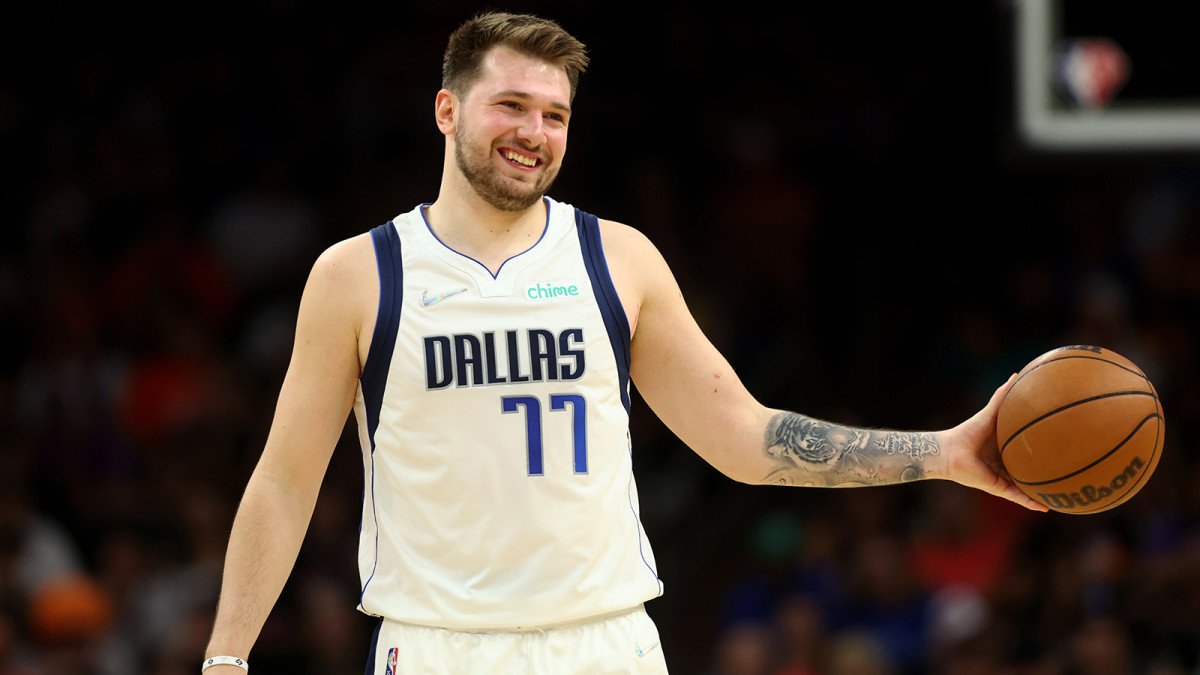 The new NBA season is underway, and Luka Doncic from the Dalla Mavericks is the early consensus betting favorite to win the MVP at +425 odds, along with Giannis ‘Greek Freak’ Antetokounmpo from the Milwaukee Bucks at +600, and Joel Embiid from the Philadelphia 76ers at +650 odds.

Nikola Jokic, the All-Star center from the Denver Nuggets, is the two-time defending MVP. Jokic is +900 odds to win the MVP for a third-straight season.

Doncic entered last season as the favorite to win the MVP. But the point guard showed up to training camp out of shape and overweight. He admitted that he indulged himself over his summer vacation when he returned home to his native Slovenia. Doncic missed his mother’s home cooking and the casual beer consumption that’s the norm in Europe. When the season began, he was slowed down by a couple of injuries that reduced his ability to work out and shed the excessive weight. It took him most of the season to slim down and he was nearly impossible to stop by the time the 2022 NBA playoffs began.

Doncic comes into this season looking extremely fit. He played competitive hoops all summer from the Slovenian national team in EuroBasket 2022 and World Cup qualifying games.

Doncic averaged 28.4 points, 9.1 rebounds, and 8.7 assists per game in 2021-22. He was the NBA’s third-best scorer and fifth-best dish man. He also posted a 25.13 player efficiency rating (PER) rating, which was ranked #5 overall. Doncic can drop a triple-double on any given night, which makes him a fantasy basketball stud. If he can elevate the Mavs to one of the top three teams in the Western Conference, he’ll increase his chances to win his first MVP. Doncic is the consensus betting favorite to win the MVP, and you can back him at +425 odds at DraftKings.

The Greek Freak won the MVP twice in back-to-back seasons. But oddly enough, the Milwaukee Bucks failed to advance to the NBA Finals in either award-winning season. In the year the Greek Freak lost the MVP race to Jokic, the Bucks secured a spot in the 2021 NBA Finals and proceeded to win the championship. If you ask the selfless Greek Freak, he’d rather win another NBA title than add another MVP award to his trophy case.

While Jokic and Embiid slugged it out last season in the MVP race, the Greek Freak quietly finished third overall in the voting. He averaged 20.9 points, 11.6 rebounds, and 5.8 assists per game. His PER rating of 32.12 was the second-best in the NBA last season.

Only eight players have won the NBA MVP three or more times, and the Greek Freak is looking to add his name to that prestigious list, which includes legends like Kareem Adul-Jabbar (6), Bill Russell (5), Michael Jordan (5), Wilt Chamberlain (4), LeBron James (4), Magic Johnson (3), Moses Malone (3), and Larry Bird (3). The Greek Freak is the second favorite on DraftKings’ NBA awards board at +600 odds to win the MVP.

In a battle of the NBA’s elite centers, Embiid lost a controversial MVP race to Jokic last year in one of the closest contests in 20 years. For a large chunk of last season, a dominant Embiid emerged as the betting favorite to win MVP.

Embiid won the NBA scoring title, averaging 30.6 ppg. He also averaged 11.7 rebounds and 4.2 assists per game. He finished the season with a 31.24 PER rating, which was ranked #3 overall.

Fans in Philadelphia will bemoan that Embiid racks up insane stats during the regular season, but he’s ineffective in the postseason because he’s hampered by injuries. Last postseason, Embiid suffered a gruesome orbital fracture and missed a couple of games in the Eastern Conference semifinals. He eventually returned to the starting lineup wearing a protective mask, but the Heat still knocked out the 76ers.

Embiid enters this season with a chip on his shoulder for losing last year’s MVP race, which is why he’s one of the popular picks to win the award this season. Embiid is the third-favorite on the board at +650 odds.

Durant is widely considered the best player in the league over the last decade, but the big man has only won the MVP once back in the 2013-14 season. Durant averaged 29.9 points, 7.4 rebounds, and 6.4 assists per game for the Brooklyn Nets last season. He appeared in just 55 games because of an MCL knee sprain.

If Durant can remain healthy and lead the Nets to a top playoff seed in the Eastern Conference, he’ll vastly improve his chances to win a second MVP. However, both seem like a risky proposition, because the Nets are such a volatile team thanks to the unpredictability of teammate Kyrie Irving. The Nets could lock up the #1 seed, or implode midseason with Durant and Irving demanding trades.

If you think the Nets can pull it together this season, then you can back Durant at +800 odds to win the MVP.

Jokic, a 6-foot-11 center from Serbia, won the NBA MVP in back-to-back seasons. He’s trying to become the first player to win the MVP in three straight seasons since Larry Bird’s run in the mid 1980s. Wilt Chamberlain, Bill Russell, and Bird are the only players to win the MVP in three consecutive seasons. The fact the Jokic is mentioned in the same breath as those Hall of Famers is a testament to his abilities as one of the premier big men in the NBA. He has a deceptive post game filled with “old man moves” that you’d see older players pull off in pickup games at the local YMCA. He also has a deadly 3-point shot and is considered the NBA’s best passing big man.

Jokic averaged 27.1 points, 13.8 rebounds, and 7.9 assists per game last season with the Nuggets. He led the NBA with a 32.94 PER rating. He had to carry the Nuggets with two starters out with injuries.

Point guard Jamal Murray missed the entire 2021-22 season while recovering from an ACL injury, and forward Michael Porter played a couple of games before he underwent season-ending back surgery. Without two max-contract players, Jokic led the Nuggets to a 48-34 record and the #6 seed in the Western Conference playoffs. That feat alone tipped the scales for MVP voters, which is why Jokic edged out Embiid to win consecutive MVP awards.

With both Murray and Porter back in the starting five, Jokic does not have to carry the Nuggets by himself. It’s difficult to win the MVP in three-straight seasons in the modern era, which is why he’s only +900 odds to pull off a three-peat.

The Los Angeles Lakers might not have a well-rounded squad that could compete for an NBA championship this season. But if LeBron James is healthy, you can never count out his team in the postseason.

LeBron is currently second on the NBA’s all-time scoring list, trailing Kareem Abdul-Jabbar. He’s expected to pass Abdul-Jabbar sometime in the middle of this season, so all eyes will be on LeBron’s pursuit of the scoring record.

LeBron averaged 30.3 ppg last season, but missed out on a scoring title last season because he did not play enough games to qualify. He appeared in just 56 games because of an ankle injury.

Health is the main concern for the 37-year-old superstar. If he can fade injuries this season, then he can be a legitimate contender to win the MVP. LeBron won the MVP four times, including twice with the Cleveland Cavs and twice with the Miami Heat. For now, you can back LeBron at +2500 odds to win his fifth MVP award.

Butler is the listed as a point guard in fantasy basketball leagues, but he’s a legit point forward. Butler is the type of player that can alter his style from game-to-game to help lead his team to victory. On the nights the Heat cannot hit a shot, Butler steps up and can drop 40 or 50 points without blinking. During games when the Heat’s offense is clicking, he’s there to distribute the rock to his teammates. Other nights, head coach Erik Spoelstra utilizes Butler as the Heat’s defensive stopper.

The versatile Butler is the heart and soul of the Heat, so it’s a bit of a surprise that his MVP odds are only +5000. However, that just makes him a perfect value pick for bettors. When you look at the true definition of MVP, the Heat would not be able to compete at such a high level without him. All of the other leading MVP candidates have a legit second or even third star on their team.

Butler averaged 21.4 points, 5.9 rebounds, and 5.5 assists per game last season. But he missed 25 games because of a sore knee. Even with a bum knee, he led the Heat to Game 7 of the Eastern Conference Finals and was a missed 3-pointer away from locking up a second trip to the NBA Finals for the Heat since the 2019-20 season.