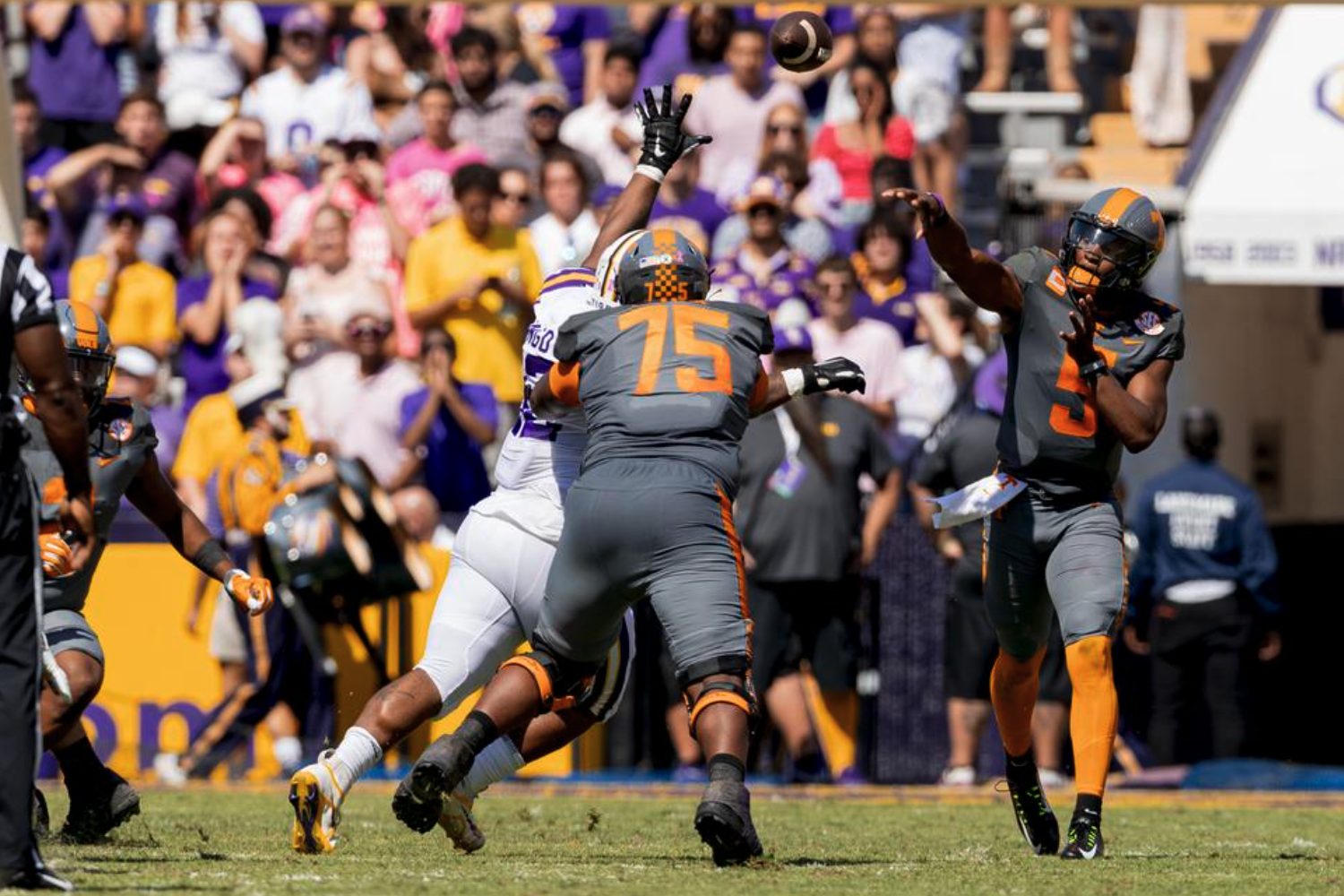 In SEC college football, there are a few games that have been given titles. One such game occurs on Saturday. It’s the “Third Saturday in October,” the traditional day for Tennessee and Alabama to play each other.

In recent years, the Third Saturday has been dominated by Alabama. The Crimson Tide have won 15 straight in the series. Only two of those games have been decided by less than a touchdown. Bama has won eight others by at least 31 points.

Tennessee is hoping to end that skid, and under second-year coach Josh Heupel, the Volunteers are off to their best start since 2016. With the Vols at 5-0 and the Tide at 6-0, it’s the first time since 1989 that both schools come into the contest undefeated. Both schools are also ranked in the top 10 in both major polls, with Alabama being the top-ranked team in the coaches’ poll and third in the Associated Press poll. Tennessee is eighth and sixth in those polls, respectively.

The spread on the game has fluctuated at various sportsbooks during the week. But by Friday, the spread had settled to ‘Bama being either an 8.5-point or nine-point favorite on the road.

The line varied throughout the week because of the uncertainty over whether Crimson Tide quarterback Bryce Young will start. Last year’s Heisman Trophy winner sprained the AC joint in his right shoulder – his throwing shoulder – two weeks ago at Arkansas. He left that game and sat out last week’s 24-20 win over Texas A&M.

Alabama coach Nick Saban told reporters earlier in the week that Young had been practicing. However, he has been on a “pitch count” as a precautionary measure. On Friday, he told Dennis Dodd of CBS Sports that the decision on whether Young plays will be made during pregame warmups.

If the junior can’t go, then redshirt freshman Jalen Milroe will get his second straight start. Last week against the Aggies, he completed 12-of-19 passes for 111 yards and three touchdowns while adding 83 rushing yards on 17 carries. He also lost two fumbles and threw an interception.

Saban told reporters that Milroe played who “a lot of anxiety” in the A&M game. That was a home game. On Saturday, the game will be held at Neyland Stadium, and the 102,000 fans will be watching Tennessee play its biggest game in years.

The Crimson Tide did play in a similar environment earlier this season, and they needed a last-second field goal to squeak out of Texas with a 20-19 victory. Saban told reporters earlier this week that a boisterous crowd on the road could present a challenge for some inexperienced players.

Especially at certain positions where being able to communicate and hear… Now, those things probably affect inexperienced players a little bit more than they do the guys that have done it before, but I think by this time we’ve played a couple road games, you hope that that experience is enhanced,” Saban said.

The game is scheduled for 3:30 p.m. ET and will be shown nationally on CBS.

Saturday’s game is the second in a five-week gauntlet for the Vols that could transform them from playoff longshots to title contenders. Last week, they whipped a ranked LSU squad 40-13 in Baton Rouge.

A loss to Alabama, in all likelihood, would not end UT’s College Football Playoff aspirations. In two weeks, they host No. 22 Kentucky and then travel to Georgia, the current AP No. 1 team. Winning both of those games would allow them to control their destiny in the SEC East. If they were to win the division, the Vols would earn a spot in the SEC Championship in December.

Three weeks ago, FanDuel offered the Vols at +8000 to win the national title. On Friday, those odds were down to +3500, and a win Saturday would certainly drive their odds even lower.

A win Saturday would also likely boost the Heisman chances of Tennessee quarterback Hendon Hooker. The redshirt senior has thrown for 1,432 yards while completing 70% of his passes this year. He’s also thrown for 10 touchdowns and has yet to toss an interception. Hooker also is the Volunteers third-leading rusher with 231 yards and three scores on 45 carries.

At PointsBet, Hooker is currently the third choice for the Heisman at +1300, behind Ohio State quarterback C.J. Stroud (-140) and Southern Cal signal-caller Caleb Williams (+1000). Despite missing at least a game and a half, Hooker is at +1400 to become just the second ever to win two Heismans.