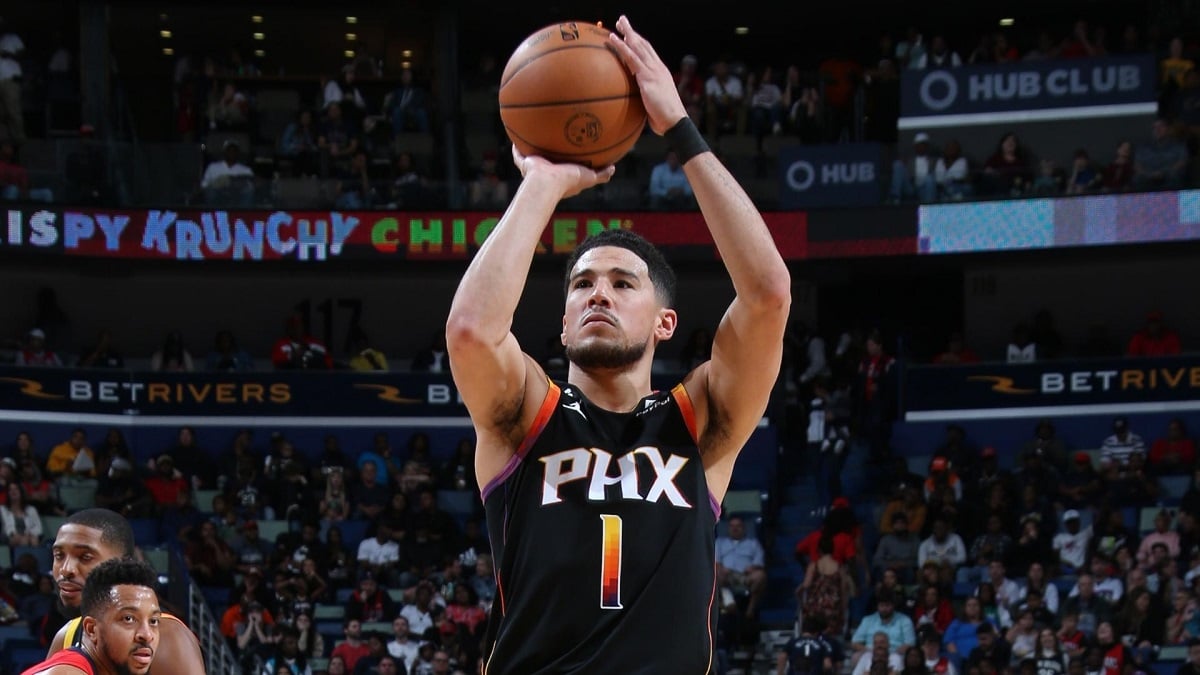 The Phoenix Suns will not have shooting guard Devin Booker in the lineup for at least the next four weeks while he recovers from a groin injury.

The Suns will reevaluate Booker in four weeks, but he could miss more time with a left groin injury.

The Suns most recently made headlines when they were sold for a record $4 billion to mortgage mogul Mat Ishbia. The sale is still pending approval, but it’s expected to go through without any problems. Ishbia edged out other billionaires interested in acquiring the Suns, including Bob Iger, Jeff Bezos, and Larry Ellison.

With a 20-16 record, the Suns are currently in sixth place in the Western Conference standings. The New Orleans Pelicans, Denver Nuggets, and Memphis Grizzlies are jockeying for first place in the conference, which seems to change hands almost daily over the last two weeks.

The Suns are only three games out of first place in the conference. But they are clustered together in a second tier of teams that includes the Los Angeles Clippers, Dallas Mavericks, and Sacramento Kings.

According to a recent update by DraftKings, the Suns are +1400 odds to win the 2022-23 NBA championship. The Suns were +1000 odds last week, prior to the injury to Booker.

In Western Conference futures, the Suns are +700 odds to win the conference for a second time in the last three seasons. They’re fifth on the conference betting board. The Golden State Warriors are the favorites to win the Western Conference for a second season in a row at +400 odds. The Clippers are right behind them at +425 odds, followed by the Denver Nuggets (+500), and Memphis Grizzlies (+550).

Suns Lose Another Starter to Injury

The Suns did not have starting point guard Chris Paul for four weeks of action. Paul injured his heel in early November, but returned to the starting five in early December. The Suns finally were at full strength for two weeks before Booker went down with a groin strain.

Booker missed a few games before returning to action against the Denver Nuggets on Christmas. However, Booker barely played against the Nuggets. He aggravated his left groin less than four minutes into the first quarter and never returned, which irked bettors who included Booker in same-game parlays at multiple sportsbooks. Without Booker, the Nuggets defeated the Suns in overtime.

The Suns hope that four weeks is enough time for Booker to recover from his groin injury. In seven games without Booker this season, the Suns are 2-5 straight up.

Booker leads the Suns in scoring by averaging a career-best 27.1 points per game. He’s also contributing 5.6 assists, 4.6 rebounds, and 0.9 steals per game. He’s shooting 37% from 3-point range, which is down from last season, yet still higher than his career numbers.

Booker posted a couple of monster games already this season, including a 58-point eruption against the Pelicans in mid-December, and a 51-point outburst against the Chicago Bulls in late November.

Landry Shamet (9.4 ppg) is the backup shooting guard on the roster. But he’s been dealing with right Achilles soreness. Head coach Monty Williams will rely on Damion Lee (8.6 ppg) and Josh Okogie (4.4 ppg) to log minutes if Shamet is unavailable.

Suns on the Road, Plus Trade Rumors

The Suns are in the middle of one of their most difficult stretches of the season. They play 10 out of 12 games on the road, with back-to-back home games sandwiched in between a six-game road trip and four-game road trip.

The Suns are halfway through their current six-game road trip, but went 1-2 so far. They have three upcoming road games against the Toronto Raptors, New York Knicks, and Cleveland Cavs.

Power forward Jae Crowder decided to sit out the season in a contract dispute, but the Suns have yet to trade him despite drawing interest from multiple teams. The Suns have also been mentioned in trade rumors involving power forward John Collins from the Atlanta Hawks, and All-Star Kevin Durant from the Brooklyn Nets.

The Suns could consider adding backcourt depth prior to the trade deadline in February. Paul is not getting any younger, and the Suns will need a sharpshooter if Booker misses more than four weeks of action.