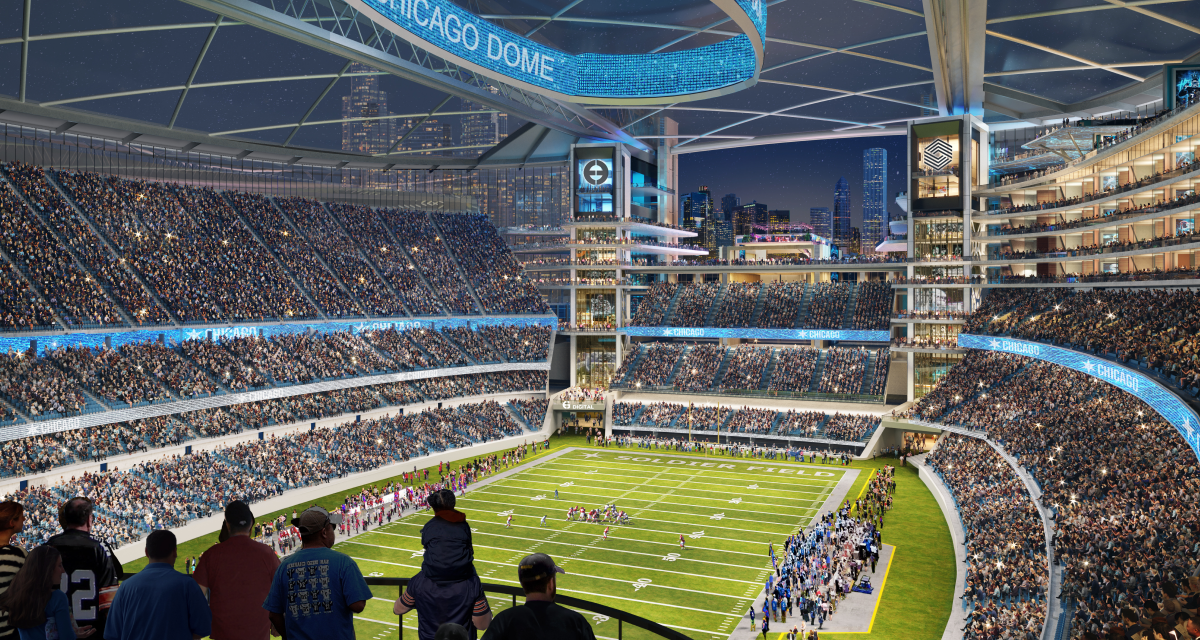 Chicago Mayor Lori Lightfoot will not let the city’s beloved Bears leave for the suburbs without a fight. On Monday, she and other city leaders unveiled their plans to re-renovate historic Soldier Field, where the NFL team has called home for more than 50 years.

Lightfoot and the city likely face long odds for now, as the Chicago Bears agreed to buy Arlington International Racecourse in Arlington Heights for $197 million last September.They plan to tear down the historic thoroughbred track and build a new stadium there.

Nevertheless, she told reporters Monday the city will make a “compelling case” for them not to leave the city’s Museum Campus along the shores of Lake Michigan.

They want a tier-one stadium environment to maximize revenues, and we agree,” Lightfoot said. “We are going to keep making the case to the Bears, the NFL, and the public that a revitalized Soldier Field makes the most economic sense for that storied franchise.”

Two of the three options Lightfoot presented include the Bears as its future primary tenant. Seating would expand from an NFL-low 61,500 to 70,000, and suites would increase from 133 to 140. There are also plans for new “experiential areas,” according to the city’s release.

In addition, one of the plans calls for turning the open-air stadium into a dome, while the other could lead to a possible dome being erected.

The cost for the upgrades could run as much as $2.2 billion, according to city figures. However, city officials said that would still save the Bears as much as $1.5 billion than if they built a new stadium at Arlington Park.

Soldier Field was last renovated in 2003. Efforts to build a modern stadium within the confines of the historic structure, namely the rows of columns that flank the east and west sides of the stadium, backfired. Eventually, that led the Bears to pursue a deal with Churchill Downs Incorporated for the suburban race track.

The city has a third plan if leaders cannot get the Bears to stay. Soldier Field would still be renovated, but the work would focus on transitioning it into a multi-purpose stadium that works better for soccer. MLS side Chicago Fire FC also plays its games at the stadium.

Regardless of which plan the city ends up utilizing, Lightfoot said the city would look to make Soldier Field a more viable year-round destination.

Dunn is a key figure behind One Central, a multi-billion-dollar mixed-use development project that’s proposed for a 32-acre lot not far from Soldier Field. One Central was also the site for Hard Rock International’s proposed casino in the city. Ultimately, city officials chose to proceed with a $1.7 billion bid from Bally’s Corp. that will be built between the River North and the River West neighborhoods.

After Lightfoot’s presentation, the Bears re-released a statement to local media it made nearly three weeks ago regarding its stadium search process.

“The only potential project the Chicago Bears are exploring for a new stadium development is Arlington Park. As part of our mutual agreement with the seller of the property, we are not pursuing alternative stadium deals or sites, including renovations to Soldier Field, while under contract,” the team’s statement read.

Lightfoot’s presentation may not be the only Bears stadium news this week. Churchill Downs will host a call with investment analysts to review its second quarter financials on Thursday morning. The Louisville-based gaming company may have an update on the sale at that time.

When Churchill Downs announced the Bears as the winning bidder last year, the company said it expected the Arlington Park transaction to close either late this year or early in 2023.